You probably landed on this page because you’re curious about finding out whether it’s a real possibility to rack up such massive commissions with David Deckels’ latest course or if it’s just another blown out road that you should walk away from.

David is known to come up with such silly statements in the past, but his latest brainchild seems a little bit too over the top, and here’s why.

He claims that you’ll routinely begin to receive two thousand dollars of cash payment directly into your mailbox by joining his program, which sounds too good to be true if we’re honest.

That’s why I decided to write this Profits Passport review so that you and many others after you can learn the truth about this program and then decide whether or not you want to join Profits Passport or look for something better instead.

What is Profits Passport?

Profits Passport is being represented as the latest automated cash-making sweat deal that can easily fool anyone in believing they can become an overnight success story.

The creator of this course, David Deckel, claims that he’ll do all the work for you while you sit there and watch the commissions roll in. I’ve reviewed many similar income opportunities in the past, and I can comfortably spot a scammer when I see one.

That being said, this system is a little bit tricky because it’s a scam in disguise.

The way this system works is quite smart and ultra-suspicious at the same time. It will force you in believing that you can achieve the same success as many other members before you, but in reality, it’s nothing more than a camouflaged Ponzi scheme.

David Deckel has been in the industry for such a long time, and in that time, he has mastered the art of creating slick-looking marketing systems like this one. 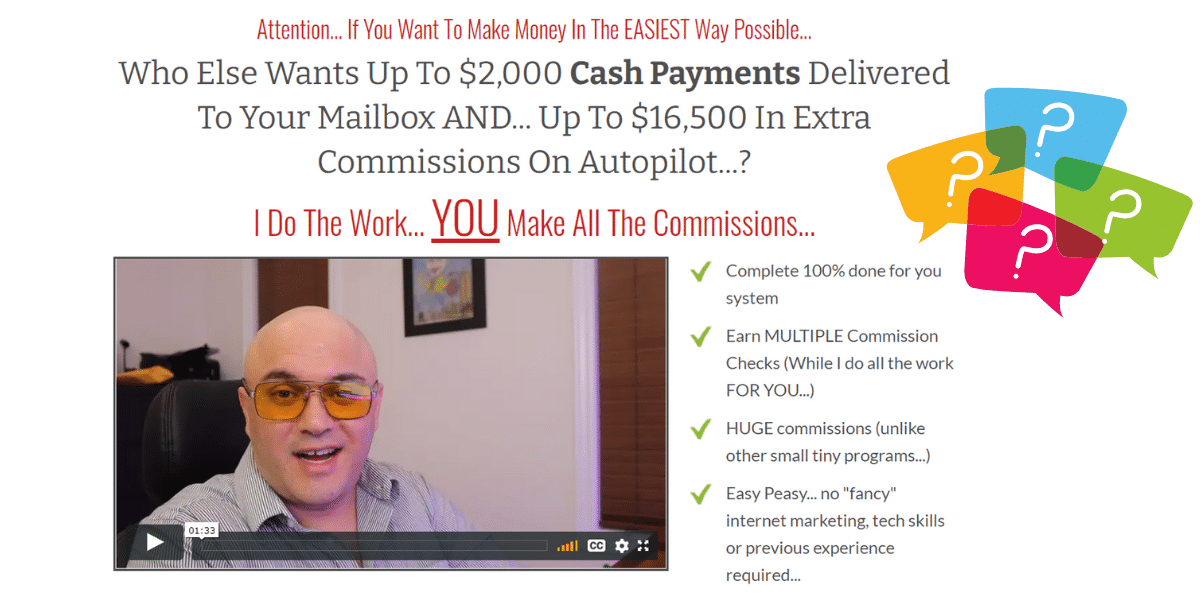 Most of his previous programs are created in such a way that will force you into thinking that you’ve come across the next big thing, which in my opinion, can’t be further from the truth.

His previous revolutionary system Funnel X Roi, which is very similar to this one, has the same promising headline, the same mind-boggling testimonials, and the same sales video but in a new revamped form.

No, the courses are not the same, but they have the same feel.

What it looks like to me is that David has re-organized his last program and made it look like a brand new course. He’s improved this one by adding a new opportunity, but it’s pretty much a duplicate from his previous one.

How Does Profits Passport Work?

As previously mentioned, the way this system works is quite smart.

The course’s sales page has a strong emphasized statement that claims that he’ll do all the work while you make all the commissions, but in reality, it’s the other way around.

David won’t do all the work for you because this is just a sales copy designed to make you believe that you can become an overnight millionaire by doing nothing.

This is not true, since as we all know, making money online requires patience, persistence, and hard work above all else.

So, how does it work?

Before you become a member of Profits Passport, you’ll be asked to go through an eight-step process and sign-up to many platforms by using someone else’s affiliate link.

Once you do, the person who invited you to join Profits Passport will get paid since you’ll be signing up to these platforms with his referral link.

Upon signing up, David will then share with you a link that you can use to re-promote his system. When you share that link with others, they become your referrals, and they need to go through the same process that you went through when you first signed up.

Is David Deckel a Scam?

It’s hard to answer this question in all honesty, but I’ll try to anyway.

David Deckel is not a scam because you can actually make money with his system. However, there is a slight issue that should concern anyone that’s thinking of signing up for his program.

The problem with systems like these is that all of the affiliates who are promoting them start to look the same after a while.

Don’t get me wrong, it might work initially, but it will undoubtedly crash after some time since all of the upcoming affiliates (thousands of them) will be promoting the same sales page in the same way. (Saturation formula)

You can make some cash at the beginning, but your conversions will tank at some point, and trust me when I say, you don’t want to be the last person that got in.

Is Profits Passport a Scam?

I would necessarily label Profits Passport as a scam, but I definitely don’t recommend it either. These DFY systems tend to look very appealing at first but they are usually doomed to fail at the end.

I categorize them as useless because you’re not learning any valuable skills that will set you up for the long run. You’re not being taught how to do proper marketing, drive traffic the correct way, create a meaningful relationship with your referrals, and so forth.

Instead, you’re being shown where to buy traffic and how to send it to the Profit Passport sales page, and this is a huge problem considering that once the system collapses, your earning will follow.

Is There a Better Alternative Instead?

Of course, there is, and I’ll gladly share it with you.

It’s a good thing you found this Profits Passport review because otherwise, you would have fallen for this masked scam and have gone one step back instead of two steps forward.

Real income opportunities do exist, and the web is full of them. The only problem is that they’re challenging to find, considering that they’re usually concealed behind thousands of scams like the one I wrote of today.

And out of all the legit programs that I’ve come across, the one I would recommend the most is, without a doubt, Wealthy Affiliate.

There you will find all the training and tools you need to go out and crush it with affiliate marketing. The business model is quite simple, doesn’t require huge startup costs, and is very beginner-friendly.

Some of the members inside Wealthy Affiliate are earning four, five, and even six figures per month. The image below is living proof of this…

Just please don’t get fooled and start to think that I’m recommending a “get-rich-quick” scheme. Replacing your current income with the help of affiliate marketing is a realistic opprotunity, but getting there will require you to put in a lot of hard work, to stay committed, and to have the correct mindset above anything else.

Wealthy Affiliate is free to sign-up with, and I strongly suggest you check it out.

Since I’m ending my Profits Passport review, I also encourage you to ask me some questions regarding the program, and I will do my best to answer them promptly. Don’t forget that just like you, I’m also a caring and easy-going guy that would love nothing more than help you out.