I created this article so that I can teach you how to delete a funnel in Clickfunnels safely and efficiently. Trust me, the entire procedure is so simple, but that doesn’t mean you can’t mess it up.

I have screwed up a couple of winning funnels in the past and lost a lot of money during that time, and that’s why I want to help you avoid the same mistakes that I did.

I think that we can both agree that Clickfunnels is a great, user-friendly tool with whom you can quickly build, remove, and restore funnels, and it’s all fun and games until you run out of space.

This typically happens if you’re subscribed to the basic membership plan, and that’s why you might want to consider moving to the premium one where you’re not limited to the number of funnels you’re allowed to use.

I know that the price of $297 per month may seem like a lot to you, so that’s why I want to encourage you to try out another tool that goes by the name of Autofunnels by GetResponse.

Hear Me Out: I’ve been an affiliate marketer for quite some time now, and I managed to build this blog and make a decent living out of it, and I wouldn’t have made it if I didn’t have the support from this community.

How To Delete A Funnel In ClickFunnels

After Russel became aware of the storage issues that many of his users had, he came up with the idea to allow them to archive their funnels instead of deleting them altogether.

It’s pretty much the same thing as deleting them, but instead, you’re putting them aside for an unspecified amount of time. Don’t worry; your funnels will be safe and sound.

Archiving your funnels will make your dashboard look a lot cleaner, and you’ll be able to find any project that you’ve worked on in the past with ease. Please know that your funnel won’t show up as active if you decide to archive it.

Since you’re subscribed to the starter membership, you’re limited to twenty funnels only. This means that you shouldn’t just remove any random funnel, but instead choose the one that you need the least.

How To Archive A Funnel In Clickfunnels

Archiving a funnel in Clickfunnels is quite easy to do, and it shouldn’t take your more than three minutes to complete this task. All you need to do is follow the steps that I’ve laid for you, and you’ll be finished in no time.

Step #1: First, you need to access your Clickfunnels account, and you can do that by clicking on the “Member Login” button that is located at the top right corner of your screen and entering your login credentials.

Step #2: Secondly, you would want to find the funnel that you wish to remove.

Step #3: Once you’ve found it, you need to click on the “Setting” tab at the top right corner. You can take a look at the image underneath to see which button I’m talking about.

Step #4: You’ll be redirected to another page where you need to scroll to the bottom of it and find the greyish button that says, “Archive Funnel.” What’s left of you to do is click that button, and your funnel will be removed.

Step #5: This is the fifth and last step of this tutorial, where you must double-check to see if your funnel has been removed. You can do that by going back to your funnels’ list and selecting the “Archive” tab.

If your funnel appears in the archived section, know that you have successfully set it aside for future use. You might want to read the next chapter in case you feel like getting your funnel back at some point.

How To Restore An Archived Funnel

If at any given time you feel like you want to bring your funnel back from the dead, then you should use the restore feature.

To find it, you need to visit the Archived Funnels section and click on the “Restore” button that can be found on the right side of your funnel. Take a glimpse at the image below to see which button I’m talking about.

How To Delete A Funnel Step In ClickFunnels

You’re even given the option to remove separate funnel steps instead of having to delete the entire funnel. For some, this might be a better option, and you should consider it too.

First, you would want to locate the funnel that you wish to edit. Once you’ve found it, pick a specific funnel step that you want to remove and click on the “Delete Funnel Step” button to get it done. 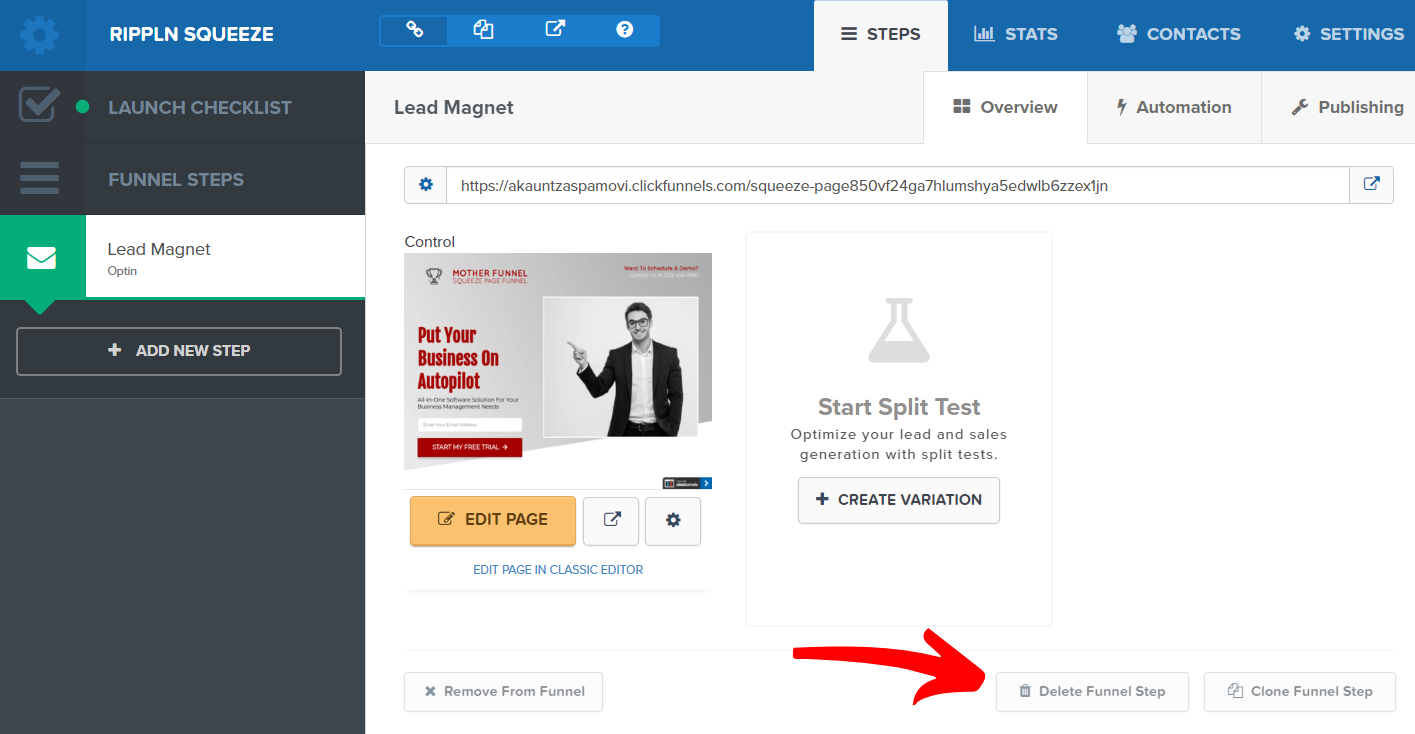 Use These Funnel Resources to Grow As a Funnel Builder

Hopefully, you found my guide on how to delete a funnel in Clickfunnels helpful, and it put you on the right path to having success with this platform. I want to give you an extra boost, and that’s why I suggest you grab some of Russel’s books.

The first book that I highly recommend is DotCom Secret, and the second is Experts Secrets.

He’s one of the most notorious funnel builders the industry has ever seen and has accumulated vast knowledge over the years. He spilled all of his expertise in these books, and you should consider picking them up if you’re serious about succeeding with Clickfunnels.